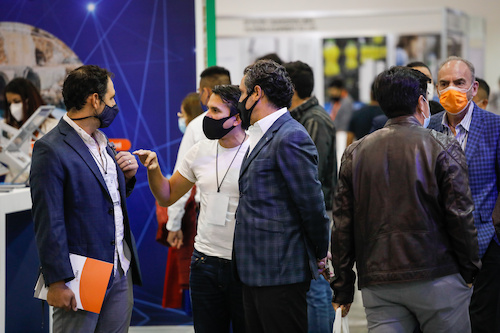 Mexico City, August 24th, 2022.- Details of the third edition of Intersolar Mexico, to be held on September 6-8, 2022, at Centro Citibanamex in Mexico City, were presented. This international platform will take place together with the 29th edition of THE GREEN EXPO® and the International Environmental Congress of CONIECO, the sixth edition of Aquatech Mexico. These three international giants will be a milestone in Mexico and Latin America for their content, speakers and solutions.

José Navarro explained that the three platforms will bring together more than 200 exhibitors from 15 countries, with more than 500 solutions. "We will have six international pavilions from countries such as Germany, Canada, the United States, India, Poland and the European Union; in the training program we have 88 conferences and panels, with the participation of 143 top-level speakers and moderators, and 28 presentations at the Stage of each exhibition," he said.

Florian Wessendorf emphasized that Intersolar Mexico contributes to the economic and sustainable reactivation of the country. Despite an unprecedented pandemic, the solar Terawatt age has begun. The global PV capacity doubled in 3 years, bringing the world’s solar fleet to one Terawatt capacity in April this year. The next step is even more promising. The association SolarPower Europe predicts the PV installed capacity will reach 2.3 Terawatt in 2025 globally”, he added.

According to Florian Wessendorf, Mexico is the leader in the annual installation of solar process heat systems worldwide and the growth of the solar industry continues to be encouraging, as it is a technology traditionally recognized for its versatility in addressing climate change and the strategic geopolitical importance of solar energy is recognized on the world stage. He also explained that no other energy technology can be implemented as quickly as solar.

"Mexico's high solar energy potential makes it one of the most attractive markets in Latin America. Not only is the market share of photovoltaic energy growing in the energy mix, but also the share of solar thermal. The abundance of the solar resource, high energy prices, dependence on gas imports, falling technology costs and the growing need to diversify resources combine to place Mexico among the world leaders in solar development. The growing number of solar installations is also stimulating the energy storage market," he said.

Karla Cedano warned that the Earth Overshoot Day, a collection of data from the United Nations to calculate the date on which humans use all the resources that the earth could generate in a year, was July 28 for the world and in the case of Mexico it will be August 31 when all the resources that the country could give to its population in a year will be consumed. "So we will owe them for future years, because from September, October, November and December 2022 we will be borrowing."

"It is very important that standards and public policy are aligned with what we do in terms of sustainability. The last year that there was no planetary overshoot was in 1969, that is, we have been owing the earth for 53 years for the way we waste and squander resources. It is very important to have events such as Intersolar Mexico, THE GREEN EXPO® and Aquatech Mexico, since resource management has to be transformed. It is not enough to install panels or take care of water, we have to do all the actions at the same time", she said.

Cedano also emphasized that solar thermal energy is the great forgotten when it is the great ally. "You can install any day and any size of solar thermal installation. In industry, two thirds of the pollution generated by the use and burning of fuels has to do with solar heat. So we can decarbonize industry if two-thirds of its polluting energy consumption is invested in solar thermal. In the case of Mexico, it is the leading country in the number of installations in the world and also in this type of energy technology", she emphasized.

Nelson Delgado pointed out that 71% of the country's electricity generation continues to depend on the burning of fuels. He also highlighted that "Mexico has a privileged position of irradiation and is part of the North American market that offers opportunities that the country should not and must not waste".

"Talking about a solar event in Mexico seems natural to us, but just five years ago this was something almost unthinkable. The share of solar generation in the generation matrix in 2017 was almost imperceptible and in 2021 solar generation was almost one-fifth of all the clean generation that Mexico generates. That is the positive part of the news," he said.

With more than 30 years of experience and events in four continents, Intersolar, the pioneer series of exhibitions and conferences in the promotion of solar energy solutions and the most relevant for the solar industry worldwide, reaffirms its interest in helping to unlock the untapped potential of the Mexican market, contributing to boost the development of the solar industry and providing a great opportunity to be updated on the latest developments in the global solar market through an event of the highest level that generates important networking opportunities; It also allows for the exchange of technology, experiences, success stories, innovations, products and services.

Mexico has everything necessary to become a solar energy power in the world, since 85% of the Mexican territory has optimal solar radiation conditions, making it one of the most privileged countries in the world in terms of solar resources. With 8.1 GW of installed photovoltaic capacity and 4.2 GWth of installed solar thermal capacity, Mexico is the second largest solar market in Latin America.

Intersolar Mexico takes place at a key moment and beyond an event has become a strategic ally in solar energy for renewable solutions, highlighting its leadership as the main platform that brings together manufacturers, suppliers, distributors and partners of the solar photovoltaic, solar thermal and energy storage industry.

Thus, the three leading international platforms in Mexico and Latin America will take place in the same place over three key days, generating opportunities to create synergy between the public and private sectors and society in general in order to actively contribute to the commitments of our country towards 2024 and the international community, aimed at combating the destructive impact of climate change and move towards a truly sustainable development.

Intersolar Global is the world's leading exhibition series dedicated to the future of clean energy. With more than 30 years of experience, Intersolar has the unique ability to bring together members of the energy industry from the world's most influential markets and supply chains. Exhibitions and conferences are held annually in Munich, San Diego, Sao Paulo, Mexico City, Gandhinagar and Dubai.

Tarsus México is the organizer with the longest trajectory in the Mexican market since 1991, presenting international quality events with trends, innovations and the global and local panorama of the industries it promotes such as PLASTIMAGEN® MEXICO, EXPO MANUFACTURA®, Aquatech Mexico, Intertraffic Mexico and THE GREEN EXPO®. Tarsus Mexico is part of Tarsus Group, one of the most important organizers worldwide. Headquartered in London, Tarsus Group organizes more than 180 events: Tarsus Medical, Connect Meetings, Dubai Air Show PLASTIMAGEN® MEXICO and the worldwide Labelexpo series. www.tarsus.mx www.tarsus.com