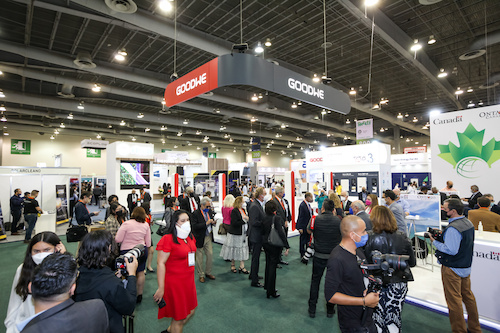 Mexico City, September 22, 2022.- Intersolar Mexico successfully held its third edition, consolidating its leadership as the main event to learn about technological trends in the photovoltaic and solar thermal industry in the Mexican solar market.

This strategic event brought together specialists from the solar energy industry, the most important markets and supply chains in the world, focusing on the areas of photovoltaics and electrical energy storage, as well as solar heating with the participation of manufacturers, suppliers, distributors and industry partners to increase knowledge and develop the advantages of these alternative energy sources.

During its third edition, a Congress about the trend topics and the most relevant issues of the solar industry in Mexico and other markets was developed through a dynamic and inclusive format, with the participation of moderators and high-level speakers from Mexico, Brazil, Spain, Argentina and Germany who shared their knowledge and experience in the new energy world.

The Intersolar Stage, located on the exhibition floor, featured a series of free technology talks on key topics such as the importance of investing in solar technology for the generation of clean, cheap and reliable electricity; solar heat systems to reduce fuel consumption and carbon footprint; gender inequality in the industry, among others.

Intersolar Mexico is positioned as the most inclusive solar event in Mexico and stands out for the excellent participation of female panelists and expert moderators in the solar sector in Mexico and abroad. A total of 45 experts in the solar industry participated in the Congress and the Intersolar Stage, 23 of them were women. The Congress program had a total of 20 panelists of which 11 were women, while 4 of the 6 moderators were women. At the Intersolar Stage 8 of the 19 technology talks were given by women.

In the sessions "Solarizing my business", which were free of charge, staff from the Solar City program of the Secretariat of Economic Development of Mexico City (SEDECO CDMX) provided technical and financial advice for the acquisition of photovoltaic and solar heating equipment to people from different economic sectors coming from several entities of the country and even from Central America.

In this context, the organizers of Intersolar Mexico together with representatives of SEDECO CDMX toured the photovoltaic plant at the Central de Abastos in Mexico City, which is expected to be in operation in 2023. Todate it is 38% completed with 600 solar panels installed and an investment of 26.1 million MXN.

The solar plant will occupy up to 22 of the 40 warehouses that this important market has and it is expected to have a large-scale photovoltaic plant with 18MW at the beginning of next year.

According to José Alberto Valdés Palacios, General Director of Energy Development and Sustainability of SEDECO CDMX, the annual savings of this first part represents 4 million MXN in electricity consumption that will benefit the common areas of the Central de Abastos, since the electricity supply is obtained through these solar panels.

The solar plant in the Central de Abastos will be the largest in the world within a city and will have 36 thousand photovoltaic modules. "This is a project that is part of the Climate Action Plan of the Government of Mexico City, operated by the Ciudad Solar program and is planned to generate significant economic savings and reduce approximately 15 thousand tons of carbon dioxide annually," said Valdés.

In this way, the third edition of Intersolar Mexico was a meeting point to unite communities and link strategic actors to advance renewable energy projects. Marisol Oropeza, spokesperson for Intersolar Mexico, said that during the three-day exhibition, visitors had the opportunity to learn about the latest developments in the solar market in Mexico and other countries with similar characteristics, as well as to be part of the most important series of exhibitions and conferences in the solar industry worldwide.

Intersolar Mexico was held simultaneously with the 29th edition of The GREEN Expo®, CONIECO's International Environmental Congress and the sixth edition of Aquatech Mexico, gathering a total attendance of 8,135 professionals. The next edition of the three international giants will be held from September 5-7, 2023, at the Citibanamex Center in Mexico City.

About Intersolar Mexico: Intersolar Mexico makes its 2019 debut as the industry's go-to source for the biggest technology trends and best B2B contacts in the up-and-coming Mexican solar market. Intersolar is the world's leading exhibition series dedicated to the future of clean energy. Intersolar Mexico is organized by Solar Promotion International GmbH, Freiburg Management and Marketing International GmbH (FMMI) and Tarsus Mexico.
With over 30 years of experience, Intersolar has the unique ability to bring together members of the energy industry from the world's most influential markets and supply chains. Exhibitions and conferences are held annually in Munich, San Diego, Sao Paulo, Mexico City, Gandhinagar and Dubai.

About Tarsus México: It is the organizer with the longest history in the Mexican market since 1991, presenting international quality events with trends, innovations and the global and local panorama of the industries it promotes, such as PLASTIMAGEN® MÉXICO, EXPO MANUFACTURA®, THE GREEN EXPO®, AQUATECH MEXICO, GREENTECH AMERICAS. Tarsus Mexico is part of the Tarsus Group, one of the most important organizers worldwide. Headquartered in London, Tarsus Group organizes more than 180 events such as Tarsus Medical, Connect Meetings, Dubai Air Show, PLASTIMAGEN® MEXICO and the Labelexpo world series. www.tarsus.mx www.tarsus.com