Intersolar Mexico – The International Exhibition and Conference for the Solar Industry

Three major shows together in the international sustainability week, a milestone in the fight against climate change and the transition to clean energy: The GREEN Expo®, Aquatech and Intersolar Mexico.

Mexico committed to combat climate change and achieve 35% of electricity generation through clean energy by 2024.

Intersolar Mexico, a strategic ally in solar energy for the Mexican market will hold its third edition from September 6–8, 2022, at Centro Citibanamex in Mexico City.

Mexico has everything it needs to become a solar energy power in the world.

The Growth and Growth of the Global Energy Storage Market – Trends, Innovations & Developments

Munich/Pforzheim, May 10, 2022. The robust, high-performance PROTEUS PV4700 central inverter for large solar parks, the Alpha Pure Series lead-free photovoltaic module and the innovative shingle matrix interconnection system SURFACE for solar cells are outstanding products within the solar industry. And their developers – Gamesa Electric, REC Solar and M10 Solar Equipment – have been honored with the Intersolar AWARD 2022. The solar industry’s flagship award was presented on May 10, 2022 on the evening before The smarter E Europe. Europe’s largest platform for the energy industry, which encompasses four individual exhibitions – Intersolar Europe, ees Europe, Power2Drive Europe and EM-Power Europe – takes place at Messe München from May 11–13, 2022. 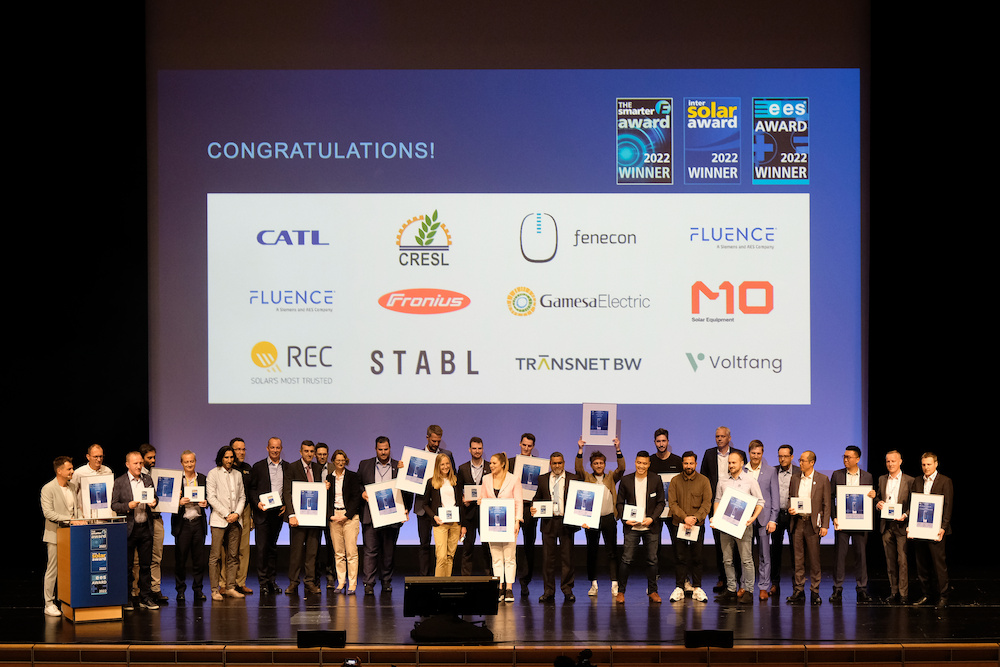 An international panel of experts has judged the submissions for the Intersolar AWARD and picked out three worthy winners to take away this top industry innovation prize in recognition of their pioneering solar technology. The awards were presented to the winners at a ceremony held at the Internationales Congress Center München (ICM) on May 10, 2022 as part of The smarter E Europe. Innovative technological developments, high efficiency levels and sustainable solutions are the name of the game in the solar industry in 2022 – whether it is module technology, inverters or balance of system. Anyone wanting to check out the award-winning products and speak to the award winners and finalists will be able to catch them at Intersolar Europe 2022 as part of The smarter E Europe 2022 at Messe München from May 11 to 13.

The winners of the Intersolar AWARD 2022

Gamesa Electric S.A.U (Spain): PROTEUS PV4700
PROTEUS PV4700 is a central inverter for large photovoltaic parks from Gamesa Electric, a subsidiary of Siemens Gamesa Renewable Energy based in Spain. It combines very high efficiency with an exceptionally high power density. Its hybrid cooling system comprises a liquid circuit for highly utilized components and an air cooling system. This ensures that the inverter operates without power derating – even at high outdoor temperatures. Moreover, the central inverter only has low harmonic components in its output current and can actively suppress certain harmonics with selective cancellation, making it suitable for use at relatively weak grid connection points.

The panel of judges was impressed by the hybrid cooling system and the low harmonic distortion. They praised the product for being robust and durable, stressing the importance of an efficient high power density for free-standing installations.

REC Solar EMEA GmbH (Germany): Alpha Pure Series
Founded in Norway in 1996, the REC Solar Group produces solar cells and modules and other clean energy products. As one of the first mass-produced, certified lead-free photovoltaic modules based on crystalline silicon, Alpha Pure is in compliance with the EU Restriction of Hazardous Substances Directive (RoHS). Alpha Pure offers up to 410 watts of power at 1.85 square meters, which is equivalent to a module efficiency of 22.2 percent. This is attained by combining powerful heterojunction solar cells with a wire-based interconnection technology with no gaps between the individual solar cells.

The panel of judges was impressed by the high performance and efficiency of the black modules, rating the power output for this product as outstanding. The small carbon footprint and lack of lead make it a sustainable alternative to conventional solar modules that could be a promising option for roof-mounted systems.

M10 Solar Equipment GmbH (Germany): SURFACE shingle matrix interconnection machine for solar cells
As part of M10 Industries in Freiburg in Germany, M10 Solar Equipment is a manufacturer of photovoltaic module production equipment. The SURFACE production process interconnects solar cells using the shingle matrix technology. The solar cells are cut into six strips are accurately connected with a small overlap of 1 to 1.2 millimeters by means of an electrically conductive adhesive. The system can also position the solar cells in a brick pattern. The result is a shingle matrix, which enables a slight curvature as well as shade-tolerant modules. This offers high potential for integration in building façades, vehicles and for other integrated applications.

The panel of judges was impressed by the creativity, uniqueness, utmost accuracy and productivity demonstrated by the system. The experts were excited by its potential as a multiplier that is paving the way for eco-friendly photovoltaic module technology.

Further information on the awards can be found at:

The World’s Leading Exhibition for the Solar Industry